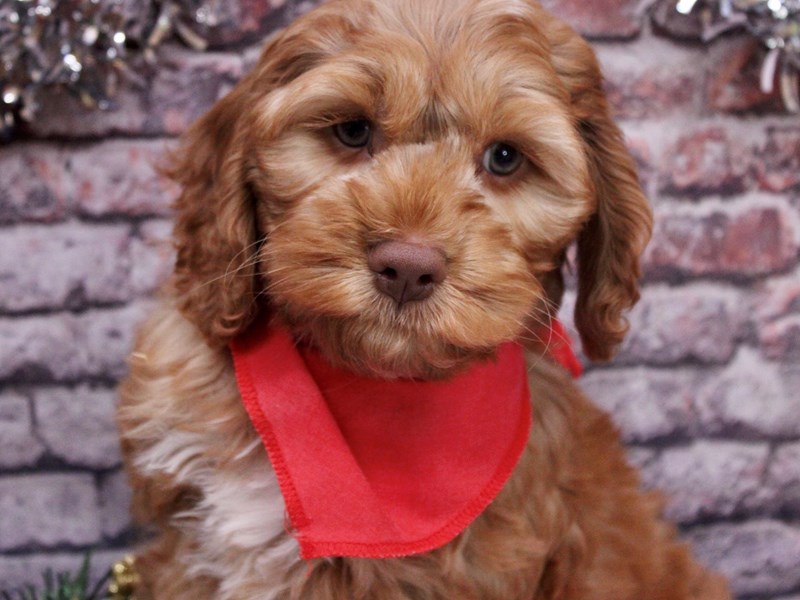 Petland Has the Best
Warranties in the Industry

Want more information on this Cockapoo? Please fill out our Pet Inquiry form below.

The Cockapoo dog breed is a small-sized dog that is pretty adorable and kind of looks like a hamster. Their size doesn’t match their personality as this breed is ready to play for hours at a stretch. This dog isn’t a pure breed and as a matter of fact, it is one of the first designer dogs as its existence dates back to the ’60s. this dog is people-oriented and has a lot of great qualities too, but first, a little about its origin. Petland is honored to offer the highest quality Cockapoo puppies who will be an instant fit on your lap and in your family. Discover more about our Cockapoo puppies for sale below!

Considered one of the original designer breeds of dogs, the Cockapoo, has won the hearts of many. Since the 1950s, this breed has been very successful as a companion and family dog. His roots stem from the United States. The Cockapoo is a fine cross between the Cocker Spaniel and a Poodle. Both parent dogs are known to be good family dogs and have been popular family pets for generations.

The Cockapoo has a very loving, curious, and affectionate personality. They are also intelligent and train quickly. They have a warm and kind temperament, making them a great fit in families with pets and children.

Cockapoos have three different basic coat types that come in a variety of colors. Straight, wavy, and tightly curled in black, cream, apricot, red, and chocolate. Some Cockapoos also have solid colors and distinct abstract markings, like a white back and an apricot chest. This breed does benefit from routine brushing and monthly bathing to prevent their coats from forming knots and matting. For straight coat types, it is wise to brush your dog’s coat at least four times per week. For those who have wavy coat types, at least five brushings per week are suggested. For Cockapoos with tightly curled coats, you should consider brushing daily to keep tangles from forming.

The Cockapoo does best having a daily feeding schedule consisting of two feedings per day, every twelve hours. This will allow for proper nutrition intake as well as prevent over-feeding, which could result in weight issues. Being sure to use quality dog food is also a great way to keep your dog healthy and feeling his best. Don’t forget to brush his teeth at least three times a week and to keep his nails clipped. These small but essential items are important for his overall health.

Fact: The Cockapoo is considered a brilliant breed of dog.

Fact: This breed makes a great companion dog. They are often used in nursing homes and rehabilitation centers much thanks to their warm demeanors and social skills.

Fact: This breed is known to get along with other pets in the household. Even cats!

Fact: The Cockapoo is considered a designer dog.

View All Cockapoo Puppies For Sale

Cockapoo's who found a loving home